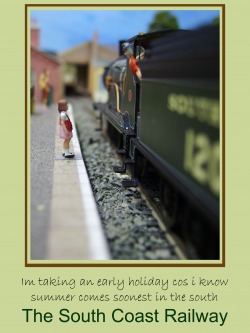 The South Coast Railway is a fictional preserved railway somewhere near Hampshire and Dorset. Its main aim was to preserve steam and diesel locomotives from around the UK, in the south of England. A sort of NRM, in the south. It runs with a main line between the stations of Bank Cliff (the railways HQ) and Green Bridge, and also a branch line to Angelstone stopping at Peaks Summit. Future plans include a return to the sea at Seatown, but as of the time of writing planning permission has been granted and it is just time now to purchase the track bed through to Seatown Beach Station.