The railway has a wide range of diesel locos of all sizes. Many not from the Southern area but in need of a home.  Most days only one or two will be running, apart from the Diesel Galas. 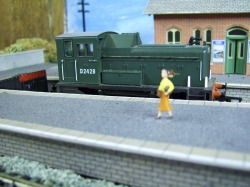 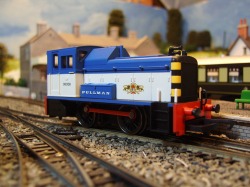 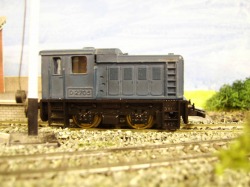 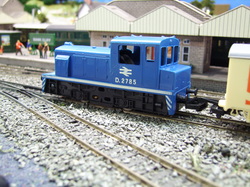 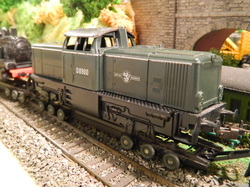 The first Diesel arrival of 2013 is this industrial shunter in BR green. Seen here at canal halt on a low loader waiting to be unloaded. (Lima) 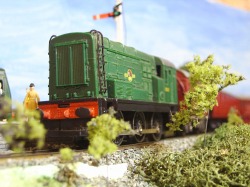 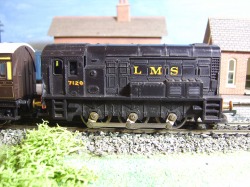 A 2008 arrival, on the railway is the for-runner to the 08 class shunters. In LMS black it was put straight to work on the branch line. Seen here arriving at Peaks Summit with the GWR 4-wheelers. (Lima) 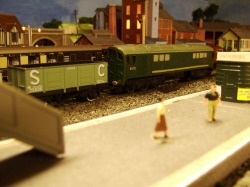 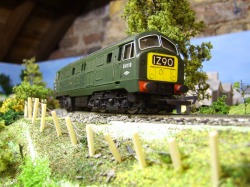 Class 29 D6110 is always a good performer. Resplendent in BR green she is seen here on the bank just after Cutting Crossing on route to Angelstone Halt, to pick up stock. (Hornby) 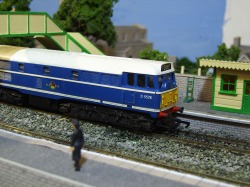 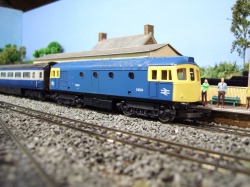 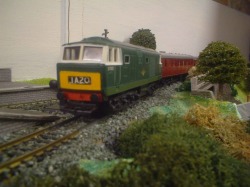 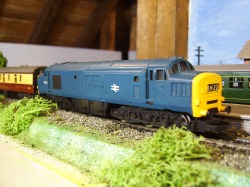 One of now five class 37s all finished in BR Blue. Seen here at Peaks Summit Platform 2 with two Mark1s "blood and custard" livery on the way to Angelstone Halt.(Hornby) 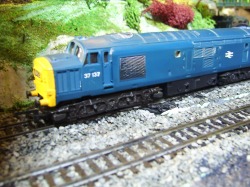 The second of the five again in BR Blue, about to enter Bridge Tunnel. (Triang Hornby) 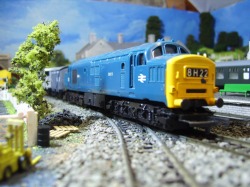 This 2008 arrival is again is a Class 37 in BR Blue. She does however carry the early numbering system. See here after couple of days on the line with a demonstration goods train at Bank Cliff. (Hornby) 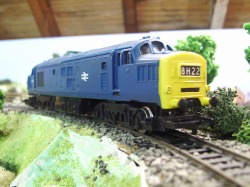 The last of the Class 37s in BR Blue. This late 2008 arrival is show here on a trial run on the Angelstone branch, just outside Peaks Summit. (Hornby) 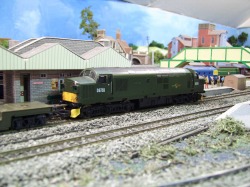 Re-entering back into service in 2009 D6755, was purchased for spares but after a review it was decided to restore D6755. New bogies, motors, wheels and windows were purchased and fitted. Seen here on her first day, fitted with snow ploughs at Bank Cliff. (Lima) 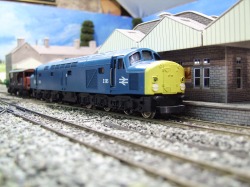 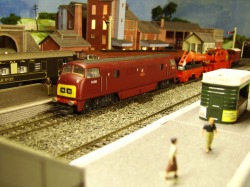 The first of two "Warships" on the line. D838 - Rapid was one of the first Locos to arrive on the railway. Here she is in BR Maroon with the 75 ton crane passing through Bank Cliff after putting into place the new footbridge at Angelstone Halt. (Lima) 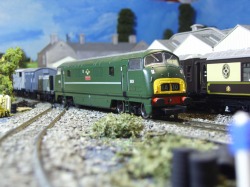 The second "Warship" D824 - Highflyer finished in BR green arrived on the railway almost two years after Rapid. She has had very little running but hopefully will play a big part in this years Diesel Galas double headed with Rapid. Seen here pulling into Bank Cliff with a demonstration goods train. (Mainline) 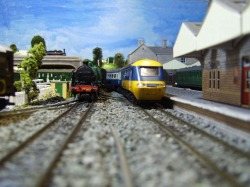 Always a pair the two Class 43s running in BR blue/grey they are here to show that we must not stop preserving rolling stock otherwise we will loose such inportant parts of history. Seen here arriving on platform 3 at Bank Cliff along side N Class No.1854. (Hornby) 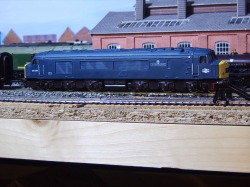 Manchester Regiment is a 2007 arrival. Finished in BR blue, when she arrived alot of time was spent finding and fitting new parts to prevent serious slipping, which on the gradients of The South Coast Railway would have been a problem. Seen here fully re-fitted outside Green Bridge sheds. (Mainline) 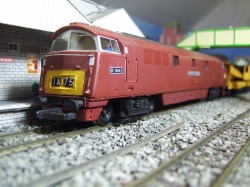 Western Courier was the first Loco to arrive at the railway. Finished in Maroon she makes a good sight with the Warship - Rapid. (Hornby) 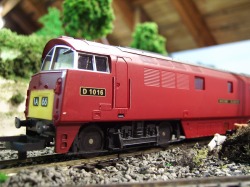 Western Gladiator, a summer 2009 arrival is the second class 52 on the line. Seen here about to enter Green Bridge tunnel. (Lima) 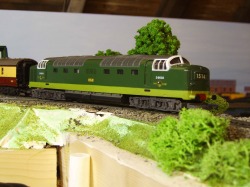 Meld was another very early arrival at the railway. In Two-tone BR green she is seen here pulling the blood and custard Mark1s exiting Green Bridge Viaduct on the way to Peaks Summit. (Lima) 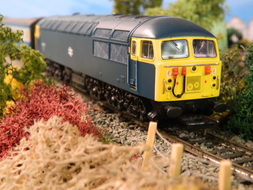 This is the first arrival of 2012 seen here about to enter Angelstone Halt with the Mk 3 rake. (Mainline) 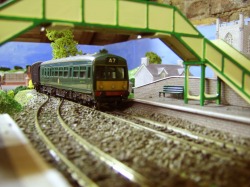 This two car DMU were not always together. Both arrived at different times from different locations. The DMU holds the honour of being the first Loco to pass under the new footbridge at Angelstone Halt, marking the opening of Platform 2. This now being the main platform for the DMU shuttle to Peaks Summit, although on that day she went into Platform 1. (Triang) 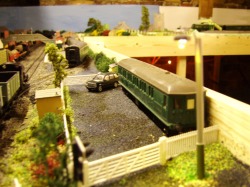 This Southern Region EMU is sat in the staff car park at Bank Cliff. No decision has been made as to whether to restore this to running order or not. Having no third rail on the line would mean it having to be either steam or diesel hauled. (Triang)